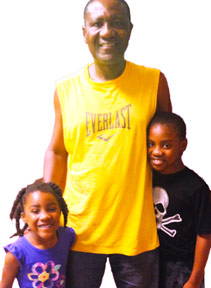 Our campaign convinced Bank of America to hold back on its threat to evict Andrews Acheampong, his wife and two children from his home of 25 years and finally grant the terms he needed to pay an inflated mortgage.

Mr. Andrews Acheampong, his wife and two children were threatened with eviction from his home of 25 years after Bank of America led him to believe he was on track to get a loan modification — and after he made the required payments.

When Andrews had started getting fewer hours of work at his job as a truck driver, even as the mortgage payments kept going up, he reached out to Bank of America for a loan modification and in 2009 got a trial modification that cut his monthly payments from $1,261 to $997. The Bank promised that if he made three payments he’d get a permanent loan modification. But after Andrews made 5 payments, Bank of America refused to accept any more and threatened him with eviction.

After the bank turned back his payment, Andrews got a letter from an eviction firm asking if he wanted to be reviewed for a modification again. He said yes and turned in all the information, but was instead threatened again with eviction.

With support from DED, Andrews fought back and saved his home.