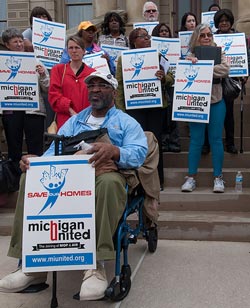 Baxter Jones is a former Detroit Public School teacher who suffered severe, permanent injuries in a car accident and must use a wheelchair. He lost his job and went into default while he was trying to get disability benefits. Wells Fargo, the bank servicing the mortgage for Fannie Mae, foreclosed even though Mr. Jones qualified for a loan modification based on his disabilities.

Baxter got non-profit financing to buy back his home at its market value of $58,000, but Fannie demanded an outlandish $242,000!

We took the struggle to stop the eviction of Baxter Jones directly to Fannie Mae’s Midwest office in Chicago on August 20, 2013. We did get Fannie Mae to talk to us, but they didn’t follow through in time.

When Mel Watt,  director of the Federal Housing Finance Agency, came to Detroit October 2, 2014, DED organized a picket before the public meeting, and then attended. After “experts” discussed with Watt for a good hour, the audience, who had been promised some time to their their stories, insisted on speaking. Baxter Jones’ account of how he was treated by Fannie Mae was electrifying.

But Baxter was unable to save his home. He moved out with support from Detroit Eviction Defense, and continues to be a strong fighter against injustice.