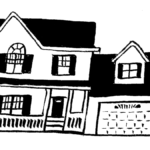 The Center for Investigative Reporting’s website, Reveal, has created a visual look at lending discrimination in U.S. housing. It has published a series of articles based on a year-long study of mortgage applications for Black applicants and compared them to white applicants across the country. In studying 31 million records, its investigative reporters discovered “modern redlining” continues today.

In the 1930s the practice of “redlining” was carried out by the federal government’s Home Owners’ Loan Corporation. It drew boundaries on maps and colored them “red” if residents were considered to be the “wrong” race or ethnicity–African Americans or immigrants, especially Jews.

Although redlining has been outlawed for half a century, and banks have a legal obligation under the Community Reinvestment Act to solicit borrowers and depositors from all segments of their communities, the laws haven’t made much difference. The Center found, specifically, that in the Detroit-Dearborn-Livonia area, Black applicants were almost twice as likely to be denied a conventional home purchase loan as white applicants in 2016!  The report helps to explain why the homeownership gap between whites and African Americans is greater today than it was during the Jim Crow era!

You can find the series of articles–including their report–on the Reveal website. Start with this overview and then choose the series of “Kept Out” articles listed on the right side.