Neighborhood march to Bank of America.

In response to an emergency call for help, neighbors in Detroit’s Rosedale Park rallied early Halloween morning, October 31, 2013, to defend the Cullors family from being evicted and having all their belongings tossed into the dreaded dumpster they discovered next to their home. The crowd delayed the wrecking crew just long enough for an Eviction Defense lawyer to rush to court and win an emergency motion to halt the eviction.

The Cullors family was targeted for eviction by Bank of America and Fannie Mae — but when the Cullors refused to leave and supporters packed the courtroom on November 13, the judge agreed to delay eviction. The protests convinced Fannie Mae to drop the case and send it back to Bank of America to negotiate a modified mortgage.

The Cullors now have a mortgage they can afford and are secure in their home — and are active with Eviction Defense helping other homeowners.

How this courageous family almost lost their home: 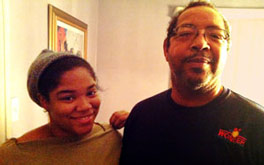 Jerry and his daughter.