Gail Herhold and her toddler got their home back 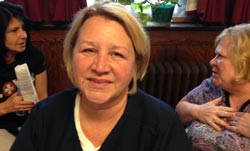 In May, 2015, Fannie Mae and Green Tree Servicing were trying to throw Gail Herhold and her three-year old son out of the home she’s lived in for fifteen years. Because she had money problems back in 2012 Gail was late with three payments. Green Tree had relentlessly tried to evict her ever since.

How Gail found she can’t fight this alone

Green Tree had refused to accept her third late payment and suddenly, in January of 2013, Gail found out her house would be sold at a sheriff’s sale. She offered to pay everything within a few weeks, but Green Tree refused to work with Gail. Fannie Mae took over, and hired Green Tree to “service” the loan.

Gail was never one to ask for help, but after two years of trying to get justice on her own, she realized that she had to reach out to family and neighbors, and to stand up in public for her rights. When she met with Eviction Defense, she was enormously relieved to find out she isn’t alone after all.

In May 2015 Fannie Mae finally agreed to sell her back the home at market value.

Your calls helped Gail save their home!