Lisa Boudreaux gets to keep home, after Freddie Mac tried to evict 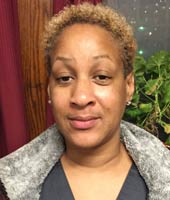 Thanks to everyone who supported her!

Lisa Boudreaux was determined to keep the Detroit home where she grew up. Her Dad took out a $100,000 loan as housing values soared in 2006, and tried to get the loan modified before he died, after values had crashed. When he passed away the home went to Lisa, who had lived there 43 years. She turned to the Federal-State Step Forward program for aid, but as in most cases, the agency failed in its mandate to help.

Meanwhile, the home was taken over by Freddie Mac. Lisa made an offer in October 2014, but Freddie Mac never replied and instead filed to evict her. The judge gave her 30 days.

Lisa Boudreaux got in touch with Eviction Defense and lined up an investor to buy back her home and let her stay on a land contract. In April 2015 Freddie Mac finally agreed to accept her offer, thanks to the new national policy we fought for, that commits both Freddie Mac and Fannie Mae to sell homes they own at market value to keep the people who were foreclosed on in their homes.