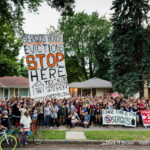 For the majority of the 20th century, real estate brokers and developers enforced restrictive covenants against the growing African-American population. That was then legitimized by federal home ownership programs which “redlined” large swaths of the city. The Federal Housing Authority program underwrote loans to whites while regularly refusing Blacks in similar economic circumstances.

Urban redevelopment and highway programs after World War II exacerbated the difficulties for African Americans who were pushed out of neighborhoods such as Black Bottom and Paradise Valley without any government-sponsored relocation plan. Many ended up in overcrowded neighborhoods scarcely better than the dilapidated areas targeted for destruction.

The city’s housing shortage was at its worst during and after the war. White homeowners organized themselves into associations to defend their neighborhood against Black’s buying homes and also against the construction of public housing, which they had come to regard as housing for Blacks. That’s the reason why, unlike New York and Chicago, Detroit didn’t take advantage of post-war federal funding to build extensive and low-cost public housing.

Between 1943 and 1965 almost 200 neighborhood associations were formed by white homeowners. This grassroots movement of white homeowners fought to maintain the racial status quo in the face of a growing civil rights movement. In 1964 the associations gathered petitions to put on the ballot a Homeowners’ Rights Ordinance, which passed by a 55-to-45 margin. The associations were also influential in electing Mayor Albert Cobo three times (1950-57), counting on him to block desegregation. They also picketed, harassed and vandalized Blacks who dared to move into “their” neighborhoods. If that wasn’t enough, they were capable of organizing violent attacks, from breaking windows to setting homes on fire.

Thomas J. Sugrue, in his The Origins of the Urban Crisis, sees these associations as serving the dual function of social clubs and neighborhood militias. He explains that the associations did not represent spontaneous mobs; their violence was well-planned terrorism. Although ultimately unsuccessful in stopping Black families from breaking through the color barrier, the associations deepened the divide between Black and white Detroiters.

The associations’ power had peaked by the mid-1960s, partly because the economy of Metro Detroit was changing and partly because of government subsidization of suburbs. Detroit’s multi-storied auto plants were outmoded and the federal government fostered military-industrial plants move to the suburbs. Between 1948 and 1967 alone Detroit lost 130,000 manufacturing jobs. Many white workers — followed for a variety of reasons. But Black workers were unable to follow their jobs and secure mortgages in the suburbs.

African American home ownership in Detroit was hard won. Within a decade of the first written restrictive covenants, Dr. Ossian Sweet bought a house beyond the border of Black Bottom and organized to defend his home. In 1925 he and his family were jailed, tried but ultimately freed. His example became a beacon to others. But breaking through the barriers of restrictive covenants and federal policy required a civil rights movement that stretched over decades.

By 2000 a bare majority of African American Detroiters owned their own homes. Banks and mortgage companies advertised for homeowners to take out a mortgage to upgrade homes and many applied thinking this would be an opportunity to pay for a major improvement. Other Detroiters saw the chance to take out a mortgage and become homeowners. Little did they realize these were inflated mortgages, often with balloon payments they could not meet.

During the 2004-06 period three-quarters of all the mortgages Black Detroiters obtained were predatory loans—even though many were eligible for a regular mortgage. And given the economic crisis that shortly followed, 100,000 Detroiters lost their homes because they were unable to meet their mortgage payment. Nationally African Americans lost 31% of their median household wealth between 2007 and 2010.

Detroit Eviction Defense has seen many people who had applied to the bank for a loan modification given their particular circumstances, whether there were job loss or health problems. Often they would be reassured that such a modification was obtainable. Later they found themselves “two tracked”: on the one hand, sending in papers to obtain a modification but, on the other hand, being slated for foreclosure and eviction!

We have worked with Detroiters who faced this problem, calling attention to their cause by petitioning banks, encouraging bank customers to support these cases and picketing banks. Banks and mortgage companies don’t like adverse publicity. We encourage Detroiters who are facing mortgages completely out of line with the market value of the home they live in to continue to fight for a modification. Feel free to come to a Detroit Eviction Defense meeting on a Thursday night and we are willing to work with you on your just demand for a reasonable mortgage.