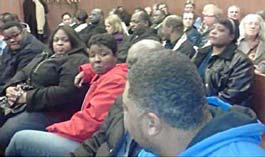 Homeowners and supporters filled the courtroom.

After we packed courtrooms, Pension Board meetings

At a packed Circuit Court hearing in December 2013, Judge John Gillis set aside the Detroit Police and Fire Pension Board’s motion for mass eviction of 57 homeowners who had been defrauded by the now-defunct Paramount Land Holdings. The Judge restored the right of each homeowner to due process, and at least 47 have now bought titles to the homes they had been led to think they already owned. 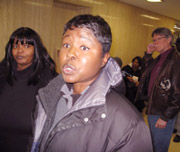 Kim Pierce fought for her home, and won!

Paramount was a scam developer funded by the Detroit Police and Fire Pension Board. When Paramount collapsed, homeowners discovered their titles were never registered, and they were also socked with bills for back taxes Paramount had promised it had paid. The Pension Board moved to evict the homeowners rather than negotiate a fair deal. Homeowners were also threatened with foreclosure by the County for Paramount’s unpaid taxes.

Homeowners were finally allowed to make their case to the Board after they and their supporters crowded a previous Pension Board meeting, getting excellent press coverage.