Wheelchair-bound woman tricked into thinking her mortgage could be modified – then the bank moved to evict. 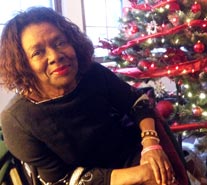 As Barbara Campbell fought to survive one medical disaster after another — cancer, heart surgery, loss of kidney function and three strokes — Flagstar Bank foreclosed on her Detroit home. Then, after many promises that it wouldn’t do so, the bank moved to evict Ms. Campbell. Fannie Mae owned the mortgage, which Flagstar serviced for the federally administered mortgage company.

As a medical hardship case, Ms. Campbell clearly qualifies for the mortgage modification she applied for, and was told that during the modification review there would be no foreclosure on her home. That promise was broken in 2013.

Barbara Campbell in her home, Christmas 2016.