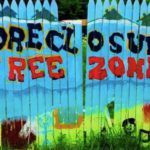 The Michigan Constitution says city property taxes must be based on assessments that happen every year and equal half the current market value of each home. The 67-mill property tax rate, which is already one of the highest rates in the country, is supposed to be based on those reassessments.

In Detroit it’s been two decades since we’ve had systematic yearly assessments. Yet the market value of homes in Detroit plummeted during the economic crisis and in most neighborhoods has not returned to what it was a decade ago.

Those over-assessments may not be legal, but they have cost thousands of Detroiters their homes, and threaten to evict more this year. Between 2011 and 2015 the Wayne County treasurer foreclosed on 100,116 Detroit homes for unpaid property taxes.  In 2016 there were 24,973 tax foreclosures, in 2017 there were 6,315 more.

“City property tax appeals reveal stark disparity,” agrees Detroit News reporter Christine Macdonald: “Detroit is over-assessing homes by an average of 65 percent, leading to higher tax bills, according to a Detroit News analysis of more than 4,000 appeal decisions over the past three years by a state board.” (12/19/13)

Two out of five Detroit homeowners are considered poor, and many shouldn’t have been charged property taxes at all. But few of them know that they could qualify for a poverty exemption. This exemption is not well publicized and is not retroactive, and the procedure puts a huge burden on poor and disabled people – they must get an application to apply and file each year.

Until recently, unpaid water bills were tacked onto the property taxes and also became the basis for foreclosure.

What’s more, an 18% penalty is added to the unpaid taxes each year. If a family falls behind for three years, it can lose the home to foreclosure.

Although it’s possible to work out an agreement with the city treasurer, and even to cut the penalty rate to 6% in some cases, the reality is that taxes have been unfairly levied. And in the Wayne County blocks where most homeowners are African American, the tax foreclosure rate is 10-15 times the rate of foreclosure in blocks where most are not African American. This is in direct violation of the Fair Housing Act, which not only bars intentional housing discrimination, but also unjustified practices that have the same impact.

The ACLU filed suit against Detroit tax foreclosures, but suits take forever to wind their way through the courts. Meanwhile, Detroit and Wayne County officials are about to launch another round of foreclosures, and have done little to change their procedures or repair the damage that has been done to Detroit homeowners.

Detroit Eviction Defense has worked with many people who have been foreclosed and evicted, some for as little as a $600 fee that a resident didn’t realize she had. We work with homeowners or renters facing eviction. In many cases, we can help people save their homes, even after they have been auctioned off to a buyer/developer. If you are facing foreclosure, we encourage you to come to our meeting. Tell us your story and let’s work together to stop this tsunami!