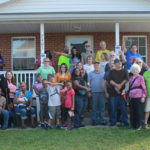 To a large extent, Detroit has been a city of single-family or two-family homes. Yet there are also apartment houses tucked into several areas of the city, including what once was public housing.

Given the racial segregation imposed once African Americans began coming North around World War I, the community found themselves confined to the most dilapidated neighborhoods. After 1910 deeds specified the exclusion of Blacks. Real estate brokers and developers encouraged homeowners to form neighborhood improvement associations to enforce these covenants. But it was government policy and lending institutions that maintained Detroit’s racial boundaries.

When the federal Housing Act of 1937 allowed local housing authorities to acquire land, construct and maintain low-income housing, the city government maintained segregation by building public housing in either “Black” or “white” areas. The Brewster Homes, reserved for Blacks, was built just north of the city’s center. Parkside Homes, reserved for whites, was built on the far east side. This set the pattern for public housing, with the Frederick Douglass Homes and the Jeffries Homes built close to downtown and open to Blacks while the Charles Terrace, Herman Gardens and John Smith Homes, built further from downtown, were reserved for whites.

Only the Sojourner Truth Homes, assigned to Black families, was located near a white neighborhood. As Blacks moved in, whites picketed and rioted. Historians have assigned these racial clashes to building up to the 1943 race riot. Shortly afterward, the Detroit Housing Commission adopted segregation as its policy. This was only ended after a 1955 U.S. Court of Appeals ruling. As late as 1960, residents of the Parkside and Charles Homes were 94% white, while the Smith Homes were 4% Black and Herman Gardens only 3% Black.

As a result of the fight over which race would occupy public housing, Detroit, in comparison with other cities, constructed less.

With 250,000 people flocking to Metro Detroit during World War II, the city had a severe housing crisis, and the Black community had the worst housing. In 1944 the UAW developed a “Memorandum on Postwar Urban Housing” that called for building subsidized housing for low-income residents of all races before tearing down substandard units. Just the opposite occurred, with the displacement of the growing African-American community. Given the force of both public policy and neighborhood associations, most of the city was closed off to African-American families and many were forced to double up in dilapidated housing near to where they been displaced. But Black families were able to move into the 12th Street area on the west side, where the majority of houses and apartments were rental units. It was this area that was to become the spark for the 1967 rebellion.

Until the 1970s landlords were pretty much free to do as they wished. They were not even legally required to give notice to evict. It was a tenants union at that time that demanded that the courts place a moratorium on evictions until due process could be established. It was the victory of the tenants union that Detroit has some landlord-tenant legislation.

Additionally, the struggle of the civil rights and Black power movements nationally forced both every level of government—federal, state and city—to ban racial discrimination at various points in the 1960s Voluntary efforts by Detroit community councils were important in ending formal segregation and in welcoming individual Black families to their neighborhoods. But by the time open housing laws were on the books, city segregation and white flight to the suburbs was entrenched.

Obligations of a Landlord

Landlords have an obligation to rent a home that is in safe and in good repair, and to keep it repaired. What can a tenant do? After informing the landlord of the problem, repairs should be done in a reasonable time. If a landlord doesn’t respond to a request for repairs, the tenant (or better yet, the tenants) can put the rent in an escrow account or pay for the repairs and deduct the cost from the rent.

An effective method of dealing with a landlord is to talk with the other tenants and form a collective body to make demands. You can form a tenant union in your own building and reach out to others in the city!

Michigan Legal Aid has a short pamphlet with practical advice about how to get the landlord to take care of problems that come up:

Detroit Eviction Defense has helped a number of tenants who live in apartments as well as those with Section 8 vouchers. You are welcome to come and tell your story at a DED meeting on a Thursday night; we can help you organize.

We have worked with tenants who faced mold and insects in their units, who were threatened with eviction when management that had misplaced a payment and with a manager who entered apartments and took personal possessions. In one public housing unit, tenants who were not listened to fought to have a voice. In another case, a woman with a Section 8 voucher was told she had to move or face the loss of the voucher because somewhere in the neighborhood that was a blighted house. In all these cases, organizing with other tenants is key.