Since 2009 there has been an average of 35,000 landlord-tenant evictions, according to the reco

rds in Detroit’s 36th District Court. That is nearly 285,000 since the economic crisis of 2009! Yet only 4,174 units, as of 2016, were registered under the city’s ordinance. So the landlords evicting families were doing so in spite of operating illegally—failing the yearly inspections that would compel rental units to be livable, and particularly check for lead problems. According to court records, many who face eviction have been living in homes without heat, with an inadequate electrical system and with mold, sewerage backup and vermin issues. Thirteen to fifteen percent of all properties in the city are owned by speculators. Along with the rise in the number of evctions, there is a rise in land contracts, which are not required by law to be registered.

Other cities not only have laws on the books, but hold landlords accountable. In a city where 54% of the residents rent and nearly 36% are living in poverty, the city needs to step up to its responsibility to see that every rental is clean and repaired. Keeping homeowners in their homes, and helping them repair their houses would go far toward creating stable communities.

Here is a list of some major players that seek to profit from foreclosures and evictions: 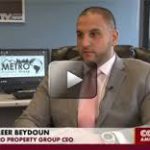 SAMEER BEYDOUN—Beydoun was CEO of Metro Property Group, a management company that bought nearly 950 Detroit-tax auctioned homes in 2011-12. Metro Property has not only a top buyer of tax foreclosed homes, it was also a top evictor as well. In the spring of 2017 Beydoun pled guilty to conspiracy to commit wire fraud and was sentenced to two years in prison for marketing homes to foreign buyers as completely refurbished and occupied by tenants. In some cases the homes were in disrepair and vacant; in other cases the company didn’t even own the home when sold.

JEFFREY CUSIMANO—Many rental companies are registered to Cusimano’s 14919 East Seven Mile rental office, including Cusimano Brothers Properties and Vargote’s Properties. In the fall of 2016 the Wayne County Treasurer foreclosed on 25 of his properties for a total of $272,900 in unpaid taxes and fees. But he buys back many foreclosed properties. The Detroit News found that in 2011 this enabled him to erase about $600,000 in taxes and liens. In fact he even repurchased his eastside office for $7,600 that year, after losing it to foreclosure the previous year for $23,300. Since 2015 the Michigan law forbids people or companies from buying back their foreclosed property, owners simply create new companies. In the fall of 2017 the city sued Cusimano’s company for more than $150,000 in unpaid property taxes; his companies have also racked up $51,000 in blight fines. (See Detroit Free Press, 106/17)

CHRIS GARNER—Garner Properties and Management, based in Taylor, manages single-family rental homes for investors, including out-of-state ones. He currently manages about 220 homes, down from 550. Between 2009 and last summer, he evicted 2,419 families.

STEVE and STEVIE HAGERMAN—This father and son team own Brick Home Management. They bought 300 properties at the recent 2017 auction, adding to the 500 they have already purchased. This 11-minute video details how they operate.

MIKE KELLY—A Grosse Woods investor, he owns 600 properties under the name of Detroit Property Exchange, but has at least 40 more companies. Kelly’s strategy is to buy homes in bulk, offering land contracts or renting without repairing the home or paying off back taxes. In fact, the Detroit Water and Sewerage Department, is suing real estate companies Alma Almont, Detroit Property Exchange Company and Midtown Homes Realty, which is also affiliated to Kelly. Gary Brown, head of the department stated “We think that the law is being broken and he’s taking advantage of poor people” selling properties that are in poor condition and have thousands owed in back taxes or water bills.


Brightmoor Residents are not shy, they wanna know